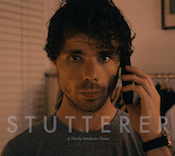 Barry Yeoman joins Peter Reitzes to discuss the Oscar award winning short film Stutterer. Barry and Peter give this film two big “thumbs up.” Mr. Yeoman points out that while the filmmaker does not stutter, he was able to authentically and powerfully present a realistic depiction of stuttering by employing “radical empathy” in his script writing.

Barry Yeoman is a journalist who specializes in in-depth reporting, a person who stutters, and a long-time participant in self-help organizations for people who stutter. Barry advises StutterTalk on a wide range of issues pertaining to journalism and stuttering. Visit Barry at barryyeoman.com.

Stutterer is a 13-minute film that won an Oscar last night for Short Film (Live Action). Stutterer is a film out of Ireland, written and directed by Benjamin Cleary. It is a very sweet film, a love story, that brilliantly captures some of the tormenting and oppressive aspects of stuttering. Greenwood, played by Matthew Needham, is a lonely young man with very noticeable stuttering who forms an online Facebook relationship with Ellie, played by Chlore Pirrie. Matthew conceals his debilitating stutter from Ellie. When Ellie plans a surprise trip to London and wants to meet Greenwood, he is faced with having to figure out how to respond. While we do not give away the ending of this short film, this is a spoiler alert because Barry and Peter discuss this film in great detail. Before listening to this podcast, you might want to first watch the film Stutterer. There is a little sexually explicit language and some brief, implied domestic abuse in this film. So for those who want to avoid such content, do not watch.

Read this wonderful interview with the director, Benjamin Cleary, about this film and how it relates to communication.