When SLPs Are Ashamed of Stuttering (Ep. 604) 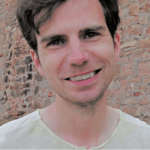 Other topics include the possible relationship between verbal stuttering and stuttering-like piano playing and stuttering-like musical performance. Mr. van de Vorst indicates that stuttering on musical instruments often occurs much like verbal stuttering – on the first note of musical segments. Robert discusses managing his own stuttering by stuttering openly while naturally or unconsciously making physical changes such as slowing his rate and pausing briefly to relax his system. The terms “speech awareness” vs. “speech tools” are discussed as well as the sometimes dueling drives to “take care of my stuttering” and to “take care of my stuttering community.” The show ends with Mr. van de Vorst being asked about his research and belief that stuttering is a sensorimotor learning problem.

Robert van de Vorst is a doctoral student in the School of Communication Sciences and Disorders at McGill University and a person who stutters. He has performed as a pianist and has taught both piano and music theory. He is interested in both the behavioural and neural mechanisms underlying developmental stuttering and other manifestations of stuttering-like behaviours.