“I Am Always a Stutterer” from the National Stuttering Association’s 2014 Annual Conference (Ep. 456) 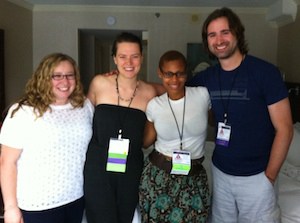 Jacquelyn Revere joins Joel Korte, Caryn Herring and Roisin McManus of the StutterTalk B Team at the 2014 annual conference of the National Stuttering Association in Washington, DC. This year’s NSA’s conference has more than 950 attendees including 300 first timers!

JACQUELYN REVERE is a person who stutters, an actress in New York City and recently launched this video blog about stuttering. During this episode, Jacquelyn is asked about her video what it feels like to stutter. Jacquelyn discusses acting, confronting the fears of being on stage and the challenges she has faced as an actor. Ms. Revere also discusses the joys of starting her own video blog and hearing from people who stutter from around the world. Joel, Caryn, Roisin and Jacquelyn end the episode by discussing their excitement about the NSA’s annual conference and Caryn shares the importance of leaving her comfort zone and meeting new people.

This StutterTalk episode was recorded and published Thursday July 3rd on the second day of the NSA’s annual conference.