Embracing and Accepting Stuttering with George Springer of the Houston Astros (Ep. 453) 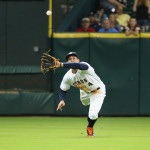 George Springer of the Houston Astros

George Springer, a 24 year old rookie outfielder with the Houston Astros of Major League Baseball, joins Peter Reitzes to discuss being a professional athlete who stutters. Mr. Springer explains the importance of embracing and accepting stuttering.

When asked if he had any advice for children who stutter, Mr. Springer responded, “I was that kid that didn’t want to speak in class and tried to avoid certain situations. But then, once I just accepted it [stuttering], it actually changed my outlook on pretty much everything and made me a lot happier with myself…Embrace it and don’t let it prevent you from doing the things that you want to do in life.”