VINCE VAWTER retired after a 40-year career in newspapers, most recently as the president and publisher of the Evansville (Ind.) Courier & Press. Mr. Vawter is the author of Paperboy, a novel for young readers, published by Delacorte Press, a division of Random House. To find out more about Paperboy, go to randomhousekids.com or vincevawter.com. 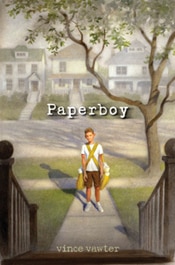 Guests on today’s show discuss a wide range of experiences including success after therapy, crashing (losing their fluency and falling apart) after therapy, strengths and weaknesses of HCRI stuttering treatment, HCRI’s marketing statements and much more.

Mr. Reitzes asks Dr. Webster about the data and marketing statement on HCRI’s website which states “98% recommend HCRI to others who stutter.” Mr. Reitzes points out that as far as back as 1997, HCRI reported on their website that “98% said they would recommend it [Hollins treatment] to other stutterers.” In 1997 HCRI reported having served more than 3,900 people who stutter. HCRI currently reports having served 6,200 people. Mr. Reitzes stated that it is uncanny that for 16 consecutive years, with the addition of thousands of new clients, the 98% recommendation rate has not fluctuated.

HARRY PAYNE is a lawyer and partner in Scott, Payne, Boyle and Swart in Wilmington, NC, and served New Hanover County in the NC House of Representatives for six terms. Mr. Payne attended HCRI in the early 1970s.

SARAH BRYANT is a 28-year-old person who stutters and in graduate school at Longwood University in Virginia working on her Masters Degree in Community and College Counseling. Sarah plans to graduate in December and hopes to be an academic advisor at the college level. In 2006 Sarah participated in an HCRI treatment course.

ALAN REZNIK is a 73-year-old professor-emeritus of chemical and petroleum engineering at the University of Pittsburg where he was Director of the Petroleum Engineering. Dr. Reznik attended Hollins in 1989 just before his 50th birthday.

LANCE LAMBERT is 26-year-old person who stutters in New Braunfels, Texas. Mr. Lambert served 6 years in the military and was stationed at Fort Carson in Colorado. In 2012 Lance attended the intensive treatment program at the Hollins Communications Research Institute.

DR. RONALD L. WEBSTER is a clinical psychologist and Founder and President of the Hollins Communications Research  Institute.

StutterTalk in no way adopts or endorses the views expressed from the people heard in today’s episode. Rather, our purpose is to provide a forum for people to express different views and different experiences.