What Is Early Intervention Really About? (Ep. 650) 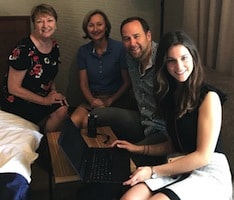 Dr. Marie-Christine Franken and Dr. Janet Beilby join Kerianne Druker and Dr. Tom Weidig at the One World, Many Voices: Science and Community World Congress in Hiroshima, Japan to discuss stuttering treatment, early intervention, research, and much more. They have a spirited discussion about the future possibility of turning on and off gene mutations related to stuttering.

One interesting point made was that the field knows how to make people “fluent” and the goal now is figure out the underlying mechanisms.

Dr. Marie-Christine Franken is a Specialist Fluency Therapist and the Speech-Language Research Lead at the Speech & Hearing Department of Erasmus University MC in Rotterdam, the Netherlands. Dr. Franken and her team of researchers published a seminal scientific study Direct versus Indirect Treatment for Preschool Children who Stutter: The RESTART Randomized Trial.

Dr. Janet Beilby, Ph.D., is Senior Lecturer and Clinical Educator at Curtin University in Western Australia and has been a lecturer, researcher and clinician in the field of stuttering for over 30 years. Dr. Beilby has treated thousands of clients, trained hundreds of students and been awarded over half a million dollars in research funds investigating varying aspects of stuttering disorders.

Kerianne Druker resides in Australia. She is a speech language pathologist and PhD student at Curtin University. Mrs. Druker is a member of the Research & Publication Committee of the International Fluency Association (IFA).

Dr. Tom Weidig resides in Luxembourg. He is co-chair of the International Fluency Association’s Research & Publication Committee and the brain behind the popular and widely read Stuttering Brain Blog.

Janet Beilby and Kathy Viljoen join Peter Reitzes to discuss a recent proposal by Speech Pathology Australia (SPA) which has many professionals and people who stutter concerned. In an ASHA blog post, Craig Coleman explains this serious issue:

“Recently, Speech Pathology Australia (the national speech-language pathology association of Australia) submitted a proposal to the Australian Government Department of Treasury that would require Medicare rebates be made available for children who stutter, but only if they are treated using the Lidcombe Program.”

StutterTalk covered this issue at length on Episode 502. For a brief and creative background on this issue, check out Katie Gore’s amazing summary The Australian Budget Lidcombe Proposal Debate: A Primer in Memes. Today, Dr. Beilby and Ms. Viljoen discuss much, including their experiences with a number of preschool stuttering treatments which have benefited children and families. They also share that Lidcombe treatment does not “work” for all preschoolers who stutter and that the current Speech Pathology Australia proposal may have the effect of discouraging other treatments which may be beneficial and appropriate. Mr. Reitzes asks Dr. Beilby and Ms. Viljoen about a submission made to Australia’s Community Affairs References Committee of the Senate, on University of Sydney letterhead, which concludes in part, that the Australian government should consider the informed choice of parents regarding speech-language pathology services. Ms. Viljoin shared, “I would like to see the SPA proposal be amended to extend coverage to children presenting with the disorder of stuttering rather to a specific treatment per se.” When asked how she might respond to a person who states, “It is only ethical to use Lidcombe treatment with preschoolers who stutter,” Ms. Viljoen responded, “I would ask them if they have had a child who stutters, if they think it is ethical for a program to offer the client to fit the program as opposed to the treatment approach to fit the client.”

Janet Beilby, Ph.D., is Senior Lecturer and Clinical Educator at Curtin University in Western Australia and has been a lecturer, researcher and clinician in the field of stuttering for over 30 years. Dr. Beilby has treated thousands of clients, trained hundreds of students and been awarded over half a million dollars in research funds investigating varying aspects of stuttering disorders.

Kathy Viljoen is the mother of children who stuttered and a Clinical Educator at Curtin University in Western Australia specializing in the management of stuttering. Ms. Viljoen supervises both undergraduate and Masters students at Curtin University in their stuttering placements. The Curtin Stuttering Treatment Clinic is the largest treatment facility for individuals who stutter in Western Australia.