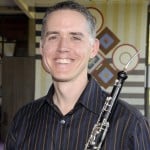 Roger reads from his chapter and discusses his experiences being a gay person who stutters. Roger is asked about finding Passing Twice: An Informal Network of Gay, Lesbian, Bisexual, and Transgender Persons Who Stutter & Their Friends. Roger is asked how religion and faith have influenced his life and about so much more.

ROGER ROE, a person who stutters, plays oboe and English horn with the Indianapolis Symphony Orchestra and teaches at Indiana University in Bloomington. In addition, Roger writes and hosts children’s concerts.