Joel’s Wedding and Advertising Your Stuttering at Work (Ep. 425) 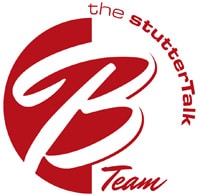 CARYN HERRING, ROISIN MCMANUS and JOEL KORTE ( of the “Stuttertalk B Team”) reminisce about Joel’s recent wedding and discuss how stuttering played a part in the day.  Later, Roisin talks about advertising to new people at work.  They wrap up the show by discussing Caryn’s recent experience providing speech therapy at Camp OurTime.

Courtney Luckman joins Peter Reitzes to discuss owning your stuttering and much more. Today’s three big topics are Courtney’s recent job interview experiences, her experience participating in Stutter Social and her responses to two recent StutterTalk episodes (Knowing What To Do and Not Doing It (Ep. 421) and How Did You Get There? (Ep. 422).

COURTNEY LUCKMAN is a person who stutters and founder of the Charlottesville, VA chapter of the National Stuttering Association. Ms. Luckman lives in Chicago now where she has become co-chapter leader of the Chicago City Chapter of the NSA.

Public Speaking, Stuttering and Doing What You Fear (Ep. 400)

Reuben was awarded second place in the Toastmasters District Contest in North Carolina and Susannah is the 2013 recipient of the The James Soper Merrill Prize which is awarded to the graduate “who, in character and influence, has best typified the highest ideals of the College.” Susannah’s acceptance speech can be viewed here.

SUSANNAH PARKIN is a person who stutters and a recent graduate of Hamilton College in Clinton, NY. Susannah interned at the Stuttering Foundation in 2011 and is currently working as a research coordinator at Massachusetts General Hospital. Ms. Parkin plans to pursue a PhD in clinical psychology.

REUBEN SCHUFF is an Aerospace Engineer. He co-founded the Teens Who Stutter (TWST) chapter of the National Stuttering Association (NSA) in Raleigh, North Carolina. Reuben contributed the chapter titled Fluency: My Untrustworthy Friend in the StutterTalk book: Stuttering: Inspiring Stories and Professional Wisdom. Reuben has appeared numerous times on StutterTalk; his appearances are archived here.

CARYN HERRING, ROISIN MCMANUS, and JOEL KORTE (the “Stuttertalk B Team”) begin the show by discussing a stuttering dream Roisin had minutes before they began recording. The dream revolves around Roisin’s role speaking at an upcoming wedding, so the group discusses different ways Roisin may or may not want to advertise.  Later, Joel talks about working as a Speech-Language Pathologist. The B Team wraps up the show by discussing an experience Caryn recently had at a special needs exhibition.

B Team episodes are archived here.

StutterTalk has published a number of episodes focussing on advertising, archived here.